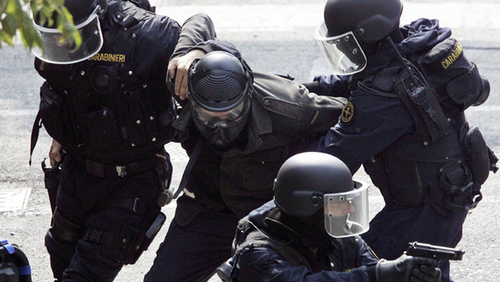 Italian police have arrested four men suspected of belonging to an Islamist militant cell believed to be planning terror attacks in the US, Israel and Italy. Two other suspects have reportedly fled the country.

Mayor McCheese, long thought to be incumbent Governor Paul LePage’s biggest threat in the upcoming Maine Gubernatorial Election, took his campaign to the skies very high above the state today.

The Independent Party candidate met with about 15,000 ardent supporters in an Alkavian Mothership that hovered a couple of miles above Bangor.

McCheese’s message came across loud and clear: “I am the first non-human to run for Governor of this great state, and I not only take great pride in that, but also intend to make sure I am a voice of the other non-humans in Maine!”

This Modern Philosopher was one of the lucky few humans to be invited along for what would best be described as a pep rally for the next Governor of Maine.  Alien beings from all over the Universe (who are also all Maine residents) were in attendance, and McCheese’s campaign wisely set up numerous…

A California couple had their five-month-old baby “snatched” by police after they took the infant to get a second opinion on a medical procedure, they claim.

Anna and Alex Nikolayev are described as loving parents who took their baby, who has a heart murmur, to Sutter Memorial Hospital in Sacramento when he started exhibiting flu-like symptoms. The family has undergone plenty of doctor visits in the last five months for the their son’s heart, and were unsettled by the treatment he was receiving.

At one point, Anna says, a nurse came in and started giving the baby, named Sammy, medicine. When she asked what it was the nurse allegedly replied, “I don’t know.”

“I’m like, you’re working as a nurse, and you don’t even know what to give to my baby…?” Anna said in an interview with ABC’s local affiliate, News10/KXTV.

They later found out that medicine was antibiotics, which Anna claims the doctor told her Sammy shouldn’t have received.

After doctors started discussing heart surgery, the Nikolayevs decided they wanted a second opinion. They weren’t categorically opposed to the procedure, but they wanted a different doctor.

“If we got the one mistake after another, I don’t want to have my baby have surgery in the hospital where I don’t feel safe,” Anna explained.