The activity of lower level IRS agents was known by people one degree away from the president. An executive office staff that saw their boss as vulnerable, as every CEO is, would have made sure that he was aware and prompted an early and public intervention.

Likewise the AP story; instead of going outside, a route any CEO would instinctively know held danger, focus inside. Before tramping on constitutional rights, especially those the press holds sacrosanct, work the White House information chain backwards — who knew leaked facts? Federal employees with secret clearance know that lie detector testing comes with the job.

Mr. Obama’s political talent is nonpareil. His path to being a CEO is one of learning by doing. First, get back into grace with your bosses – the voters! Hollow rhetoric – “holding accountable” — isn’t working. He should apologize loudly and repeatedly, taking responsibility and actions that… 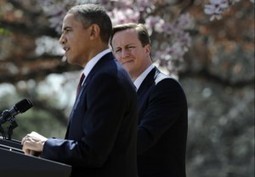 The Obama Administration’s response to the London attack has been to avoid calling the attack terrorism, let alone terrorism motivated by a radical Islamic ideology.

It was also a betrayal of Islam—and of the Muslim communities who give so much to our country. There is nothing in Islam that justifies this truly dreadful act. We will defeat violent extremism by standing together.

In stark contrast, the Obama Administration’s response has been to avoid calling the attack terrorism, let alone terrorism motivated by a radical Islamic ideology. Instead the Administration, via the State Department, said it stood with the U.K. in the face of “such senseless violence.”

Senseless violence? One can hardly term a targeted attack on a U.K. soldier in broad daylight — where the assailants gleefully admit the radical motivation behind…

Thousands Of Members Of The EDL March Against Islamic Madness In Newcastle, England

England and America should storm the Bastille and throw out our ‘out of touch’ governments.  Good to see thousands of Englishmen marching but are their traditions too polite? Will they have to be pushed to the absolute bottom??