On Sunday afternoon, the Obama Department of Justice announced that it would investigation into George Zimmerman.

That announcement came just hours after Zimmerman was acquitted for second-degree murder and manslaughter in the killing of Trayvon Martin, and within one day of the NAACP calling on the DOJ for an investigation.

Here is the Department of Justice statement in full:

As the Department first acknowledged last year, we have an open investigation into the death of Trayvon Martin. The Department of Justice’s Criminal Section of the Civil Rights Division, the United States Attorney’s Office for the Middle District of Florida, and the Federal Bureau of Investigation continue to evaluate the evidence generated during the federal investigation, as well as the evidence and testimony from the state trial. Experienced federal prosecutors will determine whether the evidence reveals a prosecutable violation of any of the limited federal criminal civil rights statutes within our…

In a move which could have dramatic ramifications, the Justice Department confirmed today that it will look into the shooting death of Trayvon Martin to determine whether federal prosecutors should file criminal charges against George Zimmerman in the wake of his acquittal.

The department opened an investigation into Martin’s death last year but stepped aside to allow the state prosecution to proceed.

In a statement Sunday, the Justice Department said the criminal section of the civil rights division, the FBI and the U.S. Attorney’s office for the Middle District of Florida are continuing to evaluate the evidence generated during the federal probe, in addition to the evidence and testimony from the state trial.

The statement said that, in the government’s words, ‘experienced federal prosecutors will determine whether the evidence reveals a prosecutable violation.’

This move follows demands from a furious NAACP for the Obama administration to intervene. 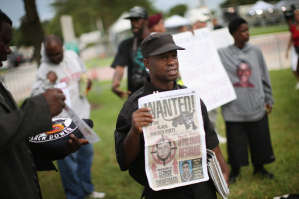 Urge followers to ‘take to the streets’ and ‘stay there’

Read the article draw your own conclusions.

Washington (CNN) — It’s hard to imagine the atmosphere in Congress getting any more toxic, but it could if Senate Majority Leader Harry Reid carries out his threat to use the “nuclear option” to budge stalled presidential appointees forward.

A top Republican aide warns that important bills like the recently approved immigration measure would never pass in a post-nuclear Senate.

If they blow the place up, then anything requiring a big bipartisan push like immigration will be impossible, the GOP aide said.

Jericho an oldie but goodie- A Brietbart death foreshadow?

The women campaigners are waiting for a green signal from religious heads in order to offer sexual favours to male protesters, to keep them motivated during protests.

At present, an Islamic fatwa (religious edict) has been placed on such favours during protests and clerics are debating whether to raise the fatwa.

“Not now. Let us wait first for what will happen, may God strengthen the Mujahedeen,” an answer came from a Brotherhood-related religious group on its Facebook page.

It came as a response to a question raised by one of the female protestersasking whether the sexual jihad was allowed in Rabae al-Adawiya Square and other key places in Egypt.

The issue has sparked widespread responses from Egyptians and scores…

Last week, Illinois became the 50th state to enact concealed-carry legislation. The Illinois law allows concealed guns on private property and places of work and worship unless property owners post signage that indicates otherwise; it prohibits guns in schools, parks, childcare facilities, government buildings, public transportation and establishments where the majority of revenue comes from alcohol sales, among other places. The big picture: It is now perfectly legal to carry a concealed firearm in public everywhere in the country except for Washington, D.C., with varying restrictions on who exactly is allowed to carry and where he or she can do so.

The death of Trayvon Martin was a tragedy.  Not just for his family, or for any one community, but for America.  I know this case has elicited strong passions.  And in the wake of the verdict, I know those passions may be running even higher.  But we are a nation of laws, and a jury has spoken.  I now ask every American to respect the call for calm reflection from two parents who lost their young son.  And as we do, we should ask ourselves if we’re doing all we can to widen the circle of compassion and understanding in our own communities.  We should ask ourselves if we’re doing all we can to stem the tide of gun violence that claims too many lives across this country on a daily basis.  We should ask ourselves, as individuals and as a society, how we can prevent future tragedies like…