Wanted:  video of President Obama telling librarians to promote Obamacare.  Somebody must have recorded that video on an iPhone or something.  Please send me the recording for publication in the interests of equal access and free speech…

Libraries and Communities Are Refusing to Follow ALA Diktat on Obamacare

weaselzippers
White House officials vetoed all public airing of a video of President Obama thanking the American Library Association Sunday for helping inform the public about Obamacare.
“We were specifically told by the White House to only show it [the
video] once to conference attendees, and [the] White House said we aren’t able to send it out,” Jazzy Wright, Press Officer for ALA’s Washington, D.C. office, told the Washington Examiner.
The ALA, which is a tax-exempt 501(C)(3) foundation, agreed last weekend during its annual meeting in Chicago to help the president get the word out about Obamacare.
As a result of the partnership between Obama and the group, librarians across the country will be “navigators” handing out White House-approved information about the new government health insurance program.
In the video, the chief executive thanked conference attendees “for helping enroll for health insurance as part of the Affordable Care Act,”…

By Andrew McCarthy | July 21, 2013
We have a Department of Justice, not a Department of Social Justice. That is an essential distinction. It is brought into sharp relief by politicized demands that George Zimmerman, having just been acquitted of murder by the state of Florida, be subjected to a second prosecution — a federal civil rights indictment — over the […] http://www.aim.org/guest-column/politics-shouldnt-force-federal-case-vs-zimmerman/

According to the White House, Zimmerman is a bad Hispanic because he was trying to keep his neighborhood safe, and obeyed the law.

But these guys are good Hispanics, because they are illegal immigrants and future Democratic voters.

On Wednesday, police in Austin arrested two Mexican nationals who reportedly participated in the gang-rape of a 13-year-old girl on June 29.

The girl, a runaway, who lives at the Settlement Home for Children, was picked up by three Latino men and driven to the Avalon Arms apartments, where she was raped by a large group of men for several hours, according to police.

As many as 13 men took turns sexually assaulting the girl. Many cheered and filmed the sickening crime on their cell phones, according to court documents. 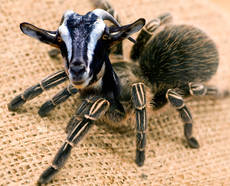 Did you know that scientists all over the globe are creating extremely bizarre human-animal chimeras? Over the past decade, there have been some absolutely stunning advances in the field of genetic modification. Today, it is literally possible for college students to create new lifeforms in their basements. Unfortunately, laws have not kept pace with these advancements, and in many countries there are very few limits on what scientists are allowed to do. As you will read about below, extremely creepy human-animal hybrids are now being created in laboratories all over the planet. And this is just the stuff that is publicly admitted. Can you imagine what kind of sick and twisted experiments are taking place in the dark corners of secret labs that nobody knows about? And what happens if these creatures get out into the wild and starting mating? At that point, it would be nearly impossible to “put the genie back into the bottle”. Scientists seem very eager to test the limits of what is possible, but what they are unleashing may have consequences that none of us ever dreamed possible.
Just the other day, we learned that scientists have created mice that have an artificial human chromosome “in every cell of their bodies”.

Will Obama really get IMMUNITY for his crimes?.

A brand-new petition seeking immunity for Barack Obama for the crimes he’s committed in office is now being circulated. And, believe it or not, Americans are actually signing it. You can’t miss this classic story with video …

via SAY NO TO SHARIA MARCH. 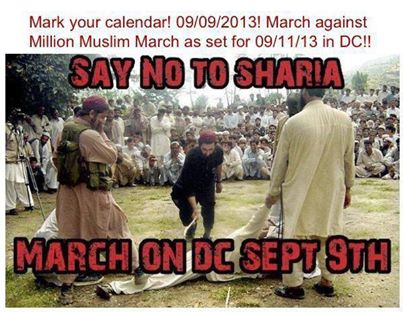 CAIR Teams Up with Church to Sue NSA.

I saw this story last week, but couldn’t think how best to word how completely dishonest CAIR was being. I didn’t need to worry: Mauro did it for me J.

CAIR Teams Up with Church to Sue NSA

The U.S. Muslim Brotherhood, apparently aware of the stigma associated with their names, has a new modus operandi: Work through interfaith partners whenever possible. The Council on American-Islamic Relations is using that tactic in its lawsuit against the National Security Agency, letting the First Unitarian Church of Los Angeles take the lead.

A coalition about 20 groups, led by the First Unitarian Church of Los Angeles, are suing the NSA for its collection of phone records that could help it track Americans in touch with terrorists and foreign intelligence operatives. The coalition also includes the Unitarian Universalist Service Committee, the Council on American Islamic Relations (CAIR) National, CAIR-California and CAIR-Ohio.

Two other comical inclusions are Students for a Sensible Drug Policy and the California chapter of the National Organization for the Reform of Marijuana Laws. Apparently, smoking pot makes you an authority on the balance between electronic intelligence-gathering and civil liberties.

The coalition argues that the NSA is in violation of the right of association derived from the First Amendment that prevents the government from “interfering with the right to peaceably assemble or prohibit the petition for a governmental redress of grievances.”

You cannot be prosecuted for solely associating with someone, but that doesn’t mean that the government’s can’t (and shouldn’t) consider your protected, legal actions when conducting an investigation. For example, it is legal for someone to praise Hamas as “martyrs,” but virtually everyone would hope that it’d be taken into account by investigators.

In justifying its lawsuit, the First Unitarian Church of Los Angeles used its own version of “Islamophobia” to stir up fears and play the part of the persecuted victim.

“We joined this lawsuit to stop the illegal surveillance of our members and the people we serve. This spying makes people afraid to belong to our church community,” Rev. Rick Hoyt said.

Move over “Islamophobia.” It’s time to make room for “Unitarianphobia.”

KCET points out that the “church has a history of political activism, including a 1950s lawsuit challenging a loyalty oath required by the state for organizations to be recognized as nonprofits.”

Well, that might explain why the First Unitarian Church has no qualms about teaming up with CAIR, a group identified by federal prosecutors as an entity of the U.S. Muslim Brotherhood’s secret Palestine Committee that was set up to promote the Hamas agenda.

Zahra Billoo, the executive director of the San Francisco Bay Area chapter of CAIR-California, depicts the lawsuit as part of a larger defense against anti-Muslim persecution by the government. “The American Muslim community has complained of such wholesale surveillance for more than a decade-with FBI visits, mosque surveillance and agent provocateurs at the forefront of those complaints,” she said in a press release.

Billoo is never one to miss an opportunity to paint the FBI as an adversary. In 2011, her CAIR chapter made a poster with a picture of a menacing FBI agent and the words, “Build a Wall of Resistance: Don’t Talk to the FBI.” Her support for Hamas (and its violence) and the elimination of Israel is available for public viewing. After Israel initiated Operation Pillar of Defense, she sent out a series of furious tweets. This included:

The relationship between CAIR and Unitarians goes beyond a single issue. The Connecticut chapter of CAIR recently held a workshop on “Islamophobia” at All Souls Unitarian Church in New London. About 75 people attended and likely learned about the supposedly anti-Muslim bigotry of CAIR’s opponents. The event was sponsored by the congregation and the Unitarian Universalist Fund for Social Responsibility.

The Unitarian Universalist Association of Congregations is a listed “interfaith partner” of the Islamic Society of North America, a U.S. Muslim Brotherhood entity. The Association is also a member of the ISNA-allied Shoulder-to-Shoulder Campaign.

Last week, the Islamist ties of Religions for Peace USA, “the largest and most broadly-based representative multi-religious forum in the United States,” were detailed. The alliance includes ISNA and its fellow U.S. Muslim Brotherhood entities, the Muslim American Society and the Islamic Circle of North America. Rev. Eric Cherry of the Unitarian Universalist Association is on the Executive Council and the Association’s Rev. Peter Morales is on the Council of Presidents.

This type of interfaith alliance-building was foretold in the 1991 U.S. Muslim Brotherhood memo that instructed the network to “master the art of ‘coalitions,’ the art of ‘absorption,’ and the principles of ‘cooperation.’” The Unitarian leadership should read it.