Commie-Lib feminists are submissive to sex fiends and tyrants.  They LOVE Islamic Jihad as well.    Rarely, are they ever there for women, but they sure stick with their men!  Just look at stupid Hitlery.  She stayed with Bill after he wackadoo’ed all over Monica.  “Hanukkah with Monica” sure didn’t seem to bother Hillary one bit.

Looks like Huma is going to follow Hillary’s plan, to stand by her man..  I can see all of this in 10 years.  Anthony Weiner, (Twit-Perv) And Huma (Submissive feminist, Muslim bro’hood lackie) running for the White House and everyone will call us sex-o-phobes for opposing them.  Ya can’t make this shit up.  Fiction is not this good.

At current, my posts on this filthy little Judenrat, Weiner are huge in stats.  What an embarrassing freak.  AmeriKa sure has its mind… 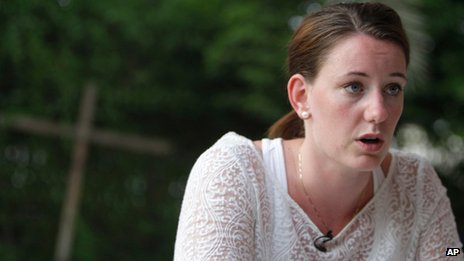 Marte Deborah Dalelv says she is “very nervous and tense” but remains hopeful she can overturn the sentence on appeal.

Interior designer Marte Deborah Dalelv was on a business trip in Dubai when she says she was raped.

The 24-year-old reported the March attack to the police but found herself charged with having extramarital sex, drinking alcohol, and perjury.

Convicted earlier this week, she says she is appealing against the verdict.

The appeal hearing is scheduled for early September.

Describing the sentence as “very harsh”, she told the AFP news agency: “I am very nervous and tense. But I hope for the best and I take one day at a time. I just have to get through this.”

The case has angered rights groups and the authorities in Norway.