had an awesome morning. Me and two buddies stepped away from our computers to do some real live foot work for freedom. We held an impeach omoron over pass rally, yep that’s right just the three of us. The response was awesome. Horns never stopped the whole time we were out there. As an added bonus we were able capture on video military movement. This is raw footage taken this morning on I-69 just south of Fort Wayne Indiana. If 3 people can generate this type of response in only a couple hours, just think what we could to if we all got out there! — with Ked Frick and Jesse Leininger.

A couple more of Obama’s unarmed New Jersey sons committed a hate crime. Look for Obama, Al Sharpton and Jesse Jackson to make speeches about this any minute now.

Looks like they profiled Autumn as a defenseless little white girl, and determined that it was OK to kill her.

h/t to Traitor In Chief

Shocking revelations about the IRS will make Obamacare an even tougher sell, seeing how that runaway agency is slated to enforce the intrusive new law.
To prevent that from happening, Georgia congressman Tom Price introduced the Keep the IRS Off Your Health Care Act.

By: Nelson Abdullah
Conscience of a Conservative
The crackpots finally took over the insane asylum. Unfortunately for us, they were not planning on making a horror movie, they were taking over the government. Every government in the entire world! Our World. AGENDA 21 is real.
The Human Race has been declared a hostile species and a threat to the planet: the environmentalists have said so. Obama’s buddy Cass Sunstein, argues strongly for human euthanasia. “…what we call after-birth abortion should be permissible. …” Dave Foreman, Co-Founder of Earth First: “We humans have become a disease, the Humanpox.” Roger Martin, environmental activist, “Fewer people mean better lives.” Obamacare death panels. Democrat strategist Steven Rattner said, “We need death panels…until we start allocating health care resources more prudently—rationing, by its proper name…” And now the United Nations has listened to the crackpots and has created Agenda 21.
Additional reference… 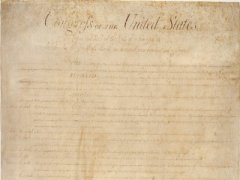 From The National Constitution Center:

As the U.S. Senate continues to debate a national law to protect journalists from protecting their sources, two Senators believe unpaid bloggers and websites like WikiLeaks shouldn’t get extended First Amendment protections.

[…] The Senate Free Flow of Information Act of 2013 would establish a national “shield law” that would give journalists protection from testifying in situations when investigators want the sources of confidential information used in media reports.

However, in today’s world, the definition of the word “journalist” means different things to different people, and two powerful Senators, Dianne Feinstein and Richard Durbin, say journalists only should enjoy extended First Amendment protection if they work for traditional media outlets on a paid basis.

Members of Congress and Hill staffers will not lose their healthcare subsidies from the government when Obamacare is implemented because of an exception proposed Wednesday by the Office of Personnel Management.

Under the current system, the government covers most of the cost of healthcare premiums for members and their staffers. But an amendment to the Affordable Care Act — proposed by Iowa Republican Sen. Chuck Grassley — threw those subsidies into question saying that members and staff must enter into the exchanges or be covered by insurance “created” by law.

The potential for staff losing the subsidies led to concerns of “brain drain” from the Hill if staffers left as a result of the increased costs.

Last week, when President Barack Obama came to the Hill to meet with Senate Democrats, he informed them