http://pissinontheroses.blogspot.com/…
(c)2013 http://www.POTRBLOG.com
FEMA 48 Hour Delivery Order: 100,000 “Doctor Scrubs”; 1000 (100 Person) Shelters; + Fuel, Showers, Bathrooms, and Hygine Equipment; Apparent Mobilization of the National Disaster Medical System
The situation appears to be a mobilization of the National Disaster Medical System
Summary:
Based on Federal Solicitations, FEMA is readying to deploy 100,000 medical personnel to 1000 shelter locations (100 medical personnel per location) on 48 hours notice. These shelter locations appear to be the housing quarters for the medical teams, as they are being stocked with atypical luxury, aka mobile showers, restrooms, hot food, medical clothing (scrubs), winter “sweat shirts and pants” etc.

Contractor comments/questions call it an “Armageddon scenario” and question the capabilities of their industries to support it. These Government solicitations have all the earmarks of massive logistical incompetence.

The threat being prepared for appears to be coming out of…

Report: Benghazi ‘Innocence of Muslims’ Filmmaker to Be Released Monday.

Nakoula Basseley Nakoula, the filmmaker falsely blamed by for 2012’s terrorist attack in Benghazi, tells Breitbart News he will be released from prison Monday and will finish his sentence at a half-way house facility.

Nakoula is not going back to his original home, as he has privacy and safety concerns.

“I’m still okay. I’m better, but I’m worried, because I’m afraid,” says Nakoula, an Egyptian-born Coptic Christian from Southern California. “Anything can happen—not from Muslim people. I’m not afraid of them, but from something else. I just don’t want to go back to jail again.”

Nakoula, who will immediately begin his probation, says he looks forward to seeing his children again and has aspirations to visit Washington, D.C. In the meantime, he plans to look for a job and apparently find stability in his life.

While serving his sentence, he…

Want to see your tax dollars promoting Islam and giving Muslims at an Islamic school in New York an opportunity to complain that other people don’t understand them, don’t respect them and discriminate against them in restaurants?

Oh, and you’ll also learn that Islam gave women rights in the 7th century that women in the West had to live without until the 19th and 20th centuries.

Just tune in to the multimedia page at the website for the Women’s Rights National Historical Park.

The Schenectady, N.Y, attraction is a part of the National Park Service. It highlights the campaign for women’s rights and has created a series of at least three videos with students from the local AnNur Islamic School.

The videos provide a forum for students to boast about Islam and complain about how they are treated. The students also express their beliefs about their own behavior and conduct.

And there’s the mention of women’s rights.

Says one student on camera: “People think that Islam oppresses women and there’s no equality, but they’re wrong – there’s equity … 7th century A.D. Islam gave women the right to be involved in politics, the right to earn and keep her own money.”

“Islam gave women a whole bunch of rights that Western women acquired later in the 19th and 20th centuries, and we’ve had these rights since the 7th century A.D., and it’s just not acknowledged worldwide,” he declared.

“Cousins need to get together because if we’re going to be [part of the non-white] majority, it makes sense for black people in this country to get down with immigration reform,” said Lewis, whose ACORN group was formally disbanded in 2010 after a series of scandals. […]

“Everyone, even all white folks in this country, acknowledge that in a minute, [the] United States of America will be a new majority, will be majority minority, a brand-new thing,” she said. 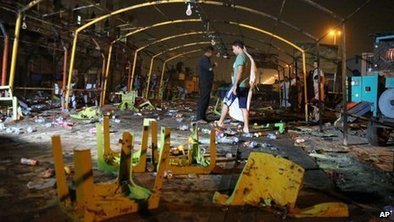 At least 60 people have been killed and 120 injured at a funeral in the mainly Shia Sadr City district of the Iraqi capital, Baghdad.

At least 60 people have been killed and 120 injured at a funeral in the mainly Shia Sadr City district of the Iraqi capital, Baghdad.