…That means the perpetrators of the campaign are rigorously blind to the beauty of the Jewish people’s reencounter with its roots, digging deep in long-abandoned ground and finding… itself. Peace will come when Islam as a whole can acknowledge other loci of light, all having the same source even if filtered through different prisms.

This year Israel received a wonderful New Year’s (Rosh Hashanah) gift from a team of archeologists led by Eilat Mazar.

She announced that, at the foot of the Temple Mount, the team had found a large gold medallion, “remarkably well kept and glittering,” with reliefs of a seven-branched menorah, a shofar, and a Torah—timeless fundaments of Judaism well familiar in Israel and much of the Jewish world today.

The medallion was in a fabric bag; along with it was another fabric bag containing 36 gold coins and other artifacts.

Mazar assessed that the medallion and coins were abandoned in 614 CE, the year of the Persian conquest of Jerusalem. She added:

The position of the items…indicates that one bundle was carefully hidden underground, while the second bundle was apparently abandoned in haste and scattered across the floor….

Just when I thought she couldn’t get any dumber, she comes up with this little gem:

Representative Nancy Pelosi states that the death of the 40-hour work week is a good thing because it means that more Americans will be free to “follow their passions.”

Now, Americans can spend more time consuming liberal media. Oh my that is something to dream of…..NOT!

My thoughts on this are “fantastic”. Now that we are losing the 40 hour work week, we have more free time…but that free time is wasted because now, we do not have the money needed to enjoy it. Hey wait…I have an idea…..

Let’s vote Nancy Pelosi out of office so she can have less hours to work so she can follow her passions. Hopefully those passions will be to kill herself. Now, you all know that I don’t mean that, but it wouldn’t hurt the world any.

Presenting thought-provoking questions Think America will attempt to inspire Americans and freedom-loving people everywhere in the world to educate, motivate, and activate them to defend freedom and stand victoriously against the evil forces of tyranny.

As a concerned American, and taking into consideration that every individual action taken by our elected officials impacts the daily lives of Americans, I am writing to all members of the U.S. Congress both Senate and House members, to remind them that the vast majority of Americans are against funding Obamacare.

The United States of America is a Constitutional REPRESENTATIVE Republic. That is your constituency MUST be taken into consideration when Congressmen and Senators vote, not backroom deals promising favors meant to advance careers.

I should not be reduced to begging or pleading with elected officials to listen to the American public, but sadly that is where we are at.

Instead of pleading and begging, I’m asking all elected officials to think far into the future and to realize just how this will impact the United States of America. Think about how this will change the landscape of this great country. Think about the future of the next generation, being saddled with debt to cover these pet projects. Think about grandma being ‘wheeled over the cliff,’ because that will indeed happen after the death panels are put in place.

Obamacare is not only a job killer it’s a country killer.

The news of Christian persecution and murder around the globe is alarming.  Yet, the world is not outraged.  I don’t see the outcry for stopping these Islamic murderers.  Where is the UN in all of this?  What about America, Britain, Europe and the rest of the world?

You think it’s bad now just wait.  It is about to get much worse.  America is full of Muslims who are ready to strike at any given moment.  They are prepared to attack American citizens, infrastructure and society at large when given the right moment.  I believe that they already are attacking.  Lets see, what chaos and destruction have we seen in… 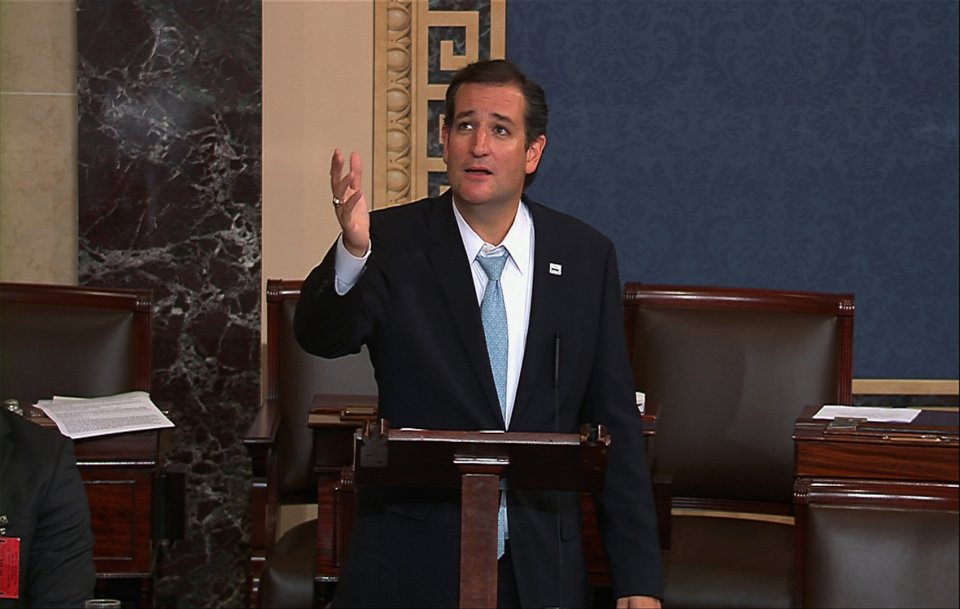 All-Night Talkathon Ends For Cruz After More Than 21 Hours

WASHINGTON (CBSDC/AP) — Tea Party conservative Sen. Ted Cruz ended his all-night talkathon to dismantle President Barack Obama’s health care law after 21 hours and 19 minutes as the Senate pushed ahead to a test vote Wednesday on a bill to avert a government shutdown.

Weary after a day and night on his feet, Cruz simply sat down at 12 noon EDT, the predetermined time for the Senate to adjourn, as several of his colleagues applauded. Senate Republicans and some House members congratulated the Texas freshman.

“I think it’s fitting this debate conclude with a prayer,” Cruz said, adding that he wanted every senator to seek the Lord’s guidance during it.

Fortunately, there are some in the media who get it. Watch the video below for one of them …

Revelation 18:3a, “For all the nations have drunk of the wine of the wrath of her fornication, the kings of the earth have committed fornication with her …”

By Katie Yoder, Fox News – “Dare a top newspaper journalist to play connect-the-dots and chances are he’ll fail miserably – at least with drawing the line between Islam and terrorism.

Yet on Monday, September 23, 90 percent of the top ten (via circulation numbers) daily newspapers’ headlines in the United States censored the words ‘Islam’ and ‘Muslim’ from Nairobi and Pakistan reports. One – the New York Daily News – didn’t…