See on Scoop.it – UNITED CRUSADERS AGAINST ISLAMIFICATION OF THE WEST 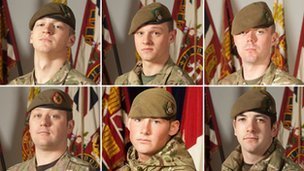 Six British soldiers who died in an Afghan bomb blast in March 2012 were “unlawfully killed on active service”, a coroner has ruled.

The six men were on patrol in a Warrior armoured vehicle when it was caught in an explosion on 6 March last year.

It turns out that increasing the debt is the problem, not the solution.

A Chinese ratings agency downgraded its US sovereign credit rating Thursday despite Washington’s resolution of the debt ceiling deadlock, warning that fundamentals for a potential default remained “unchanged”.

Dagong lowered its ratings for US local and foreign currency credit from A to A-, maintaining a negative outlook, the agency said in a statement.

The announcement came after the US Congress passed and President Barack Obama signed a bill that extends the nation’s borrowing authority and ends a two-week government shutdown.

“The fundamental situation that the debt growth rate significantly outpaces that of fiscal income and gross domestic product remains unchanged,” Dagong said in the statement, adding Washington’s solvency was vulnerable as old debts were still repaid through raising new debts.

This week, it leaked that star Guardian reporter Glenn Greenwald, who broke the news on the NSA scandals, is leaving the paper for what he described as “a once-in-a-career dream journalistic opportunity that no journalist could possibly decline.” It was soon revealed that the backer of that opportunity is billionaire eBay (s EBAY) founder Pierre Omidyar.

So what’s the new venture going to look like? Here’s what we know so far:

Omidyar is willing to pump a lot — like, a LOT — of money into it. Omidyar was one of the people approached about buying the Washington Post this summer. Rosen: “I asked how large a commitment he was prepared to make [to the new site] in dollars. For starters: the $250 million it would have taken to buy the Washington Post.”

Also on board so far:…