Obama was named in treason almost 1-year ago to the day regarding his arms shipments to our America’s enemies(LINK).
The paragraph below was written based upon the public disclosure of Admiral “Ace” Lyons:

“6. In commission of TREASON  OBAMA is engaged in purchasing and supplying guns, heavy weapons, high-powered munitions and explosives to foreign aggressors—AMERICA’S ENEMIES—around the globe. OBAMA has and continues to ship weapons from Libya to Syria through Turkey. Some weapons may be being directly shipped to Syria. Christopher Stevens was OBAMA’s point man of this operation when Stevens was murdered in Benghazi during the attack of 11-12 September 2012. In this TREASON OBAMA is arming America’s enemies: Al-Qaeda and the Muslim Brotherhood connected Syrian rebels.”

The above paragraph is taken from a treason complaint filed on 8 November 2012 – CLICK HERE.
Below is the public report sent to me this evening from…

A sign hovering above a Huntington Beach saloon for the last six years, thanking veterans for protecting our freedom, has been ordered to be removed. When he arrived at work on Monday, Johnny Kresimir, the owner of Johnny’s Booze and Pool, discovered a citation had been placed on his door. A city spokeswoman for Huntington Beach said the establishment lacked the proper permits to display the sign that reads, “Thank a Veteran for your Freedom.” 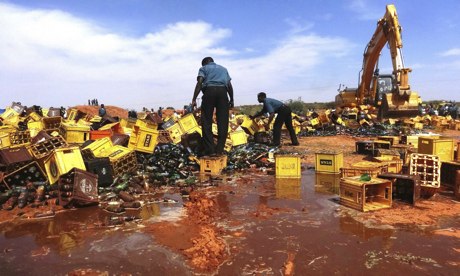 About 240,000 bottles of beer have been shattered by an earthmover as part of a widening crackdown in Nigeria‘s northern city of Kano.

Alcohol is banned under sharia law, imposed in the city in 2001, but authorities had turned a blind eye to its consumption in hotels and the Sabon Gari Christian quarter.

At the public destruction of beer on Wednesday the head of the religious police board warned that his officers would put an end to alcohol consumption.

Bars in Sabon Gari were the target of multiple bombings on 29 July. The attacks, which killed 24 people, were carried out by suspected Islamist militants who have claimed authorities are not properly applying sharia law that governs nine of Nigeria’s 37 states. The country is divided between a mainly Christian south and predominantly Muslim north.