“Have you no sense of decency, sir?” Jay Carney seemed to sneer at Fox News’ Ed Henry for having the audacity to suggest that the Regime’s 2014 policy initiatives – women in the economy, minimum wage and overtime wage increases – just might have something to do with the mid term elections.   “At long last, have you left no sense of decency?”

“These are the right things to do for the economy!” an animated Carney exclaimed.

“It has nothing to do with the midterms?” Henry pressed.

“You know what — every woman in here ought to be offended by that,” Carny simpered, resorting to his oft used tactic of trying to turn the other reporters in the room against the tough questioner. “I’m offended by it on behalf of my wife and my daughter – it’s crazy!”

Fox and Friends showed the clip from yesterday on their… 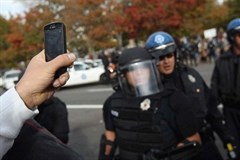 “I thought I had freedom of speech here,” the man said to the police officer.
“You don’t. You just lost it,” the officer replied.

In Connecticut, guns are being taken from patriots and if the Connecticut gun owners don’t hand over a certain gun, their guns will be taken by force..  Ditto California.  The 2nd Amendment was written to protect the First Amendment but most Americans don’t know that.

At any rate, B. Obama just passed an executive order regarding Ukraine. Bottom line with THAT executive order:  If you don’t tow the line of the White house propaganda network which is in control of Fox, CNN, MSNBC and CBS, you could have your land taken from you.  So, keep worrying about ‘freedom…

When blacks gave 80 percent of their vote to the Democratic Party in 1964, black activist Malcolm X called them “political chumps.”

White voters, X said, “are so evenly divided that every time they vote, the race is so close they have to go back and count the votes all over again. Which means that any bloc, any minority that has a bloc that sticks together is in a strategic position. Either way you go, that’s who gets it.”

Yet Democrats, said Malcolm X, failed to deliver on a promised and much anticipated new civil rights bill, knowing the party could still count on their blind support in the next election.

“You put them first,” said Malcolm X, “and they put you last. ‘Cause you’re a chump. A political chump! … Any time you throw your weight behind a political party that controls two-thirds of the government, and that party…

D.C. police shot at two dogs in the Capitol Hill neighborhood, killing one animal and capturing another, authorities said.

About 2:15 p.m. Thursday, officers responded to a report of two pit bulls running around the area of 8th Street and C Street NE. The dogs had reportedly attacked several people, according to First District Command Jeff Brown.

The officers fired their weapons at the dogs. One dog died at the scene, and the second was taken by animal control officers.

There were no serious injuries sustained to the victims in the attack, police said.

Detroit native and NHRA race car driver Brian Olatunji and the Leadfoot Motorsports team are revving up the 2014 racing season with a Big Announcement! – reality series “Dreams to Champions” has joined Discovery Communications’ Velocity network, set to debut this Saturday.

“Dreams to Champions” presents a fast paced ten episode reality series and follows motorsports young guns on the fast track. Featuring racers Brian O, Juan Carlos Blum and Jonathan Castro the show was a success when initially shown on SPEED last year. After a massive network overhaul Fox Sports Media Group broadened the channel’s focus to including a vast array of live sporting events. When SPEED was rebranded as Fox Sports 1 the decision was made to drop motorsports oriented reality programming. Discovery Communications seized the opportunity to incorporate “Dreams to Champions” into its programming portfolio on their high octane Velocity network.