Wisconsin Democrats have gone to the mats to destroy Governor Scott Walker and anyone associated with him. There was the occupation of the capital for a month by “paid volunteers” of Wisconsin public employee unions in an attempt to stop Walker’s union reforms, while state senate Democrats fled the state to deny the chamber a quorum for a vote. Then there was the recall, fraught with petition fraud that the very partisan Wisconsin Government Accountability Board – WI’s state election board – refused to even consider. There were the endless vicious attacks in the press and numerous death threats. Then there were the “ John Doe ” investigations, which have already ruined at least one defenseless individual . Democrats’ catalog of sins in Wisconsin can be read in full HERE .

Democrats owned Wisconsin for ages. It is the state where public employee unions…

The Obama administration has issued a clear warning to the first state to drop the Common Core State Standards.

The U. S. Department of Education said in a letter to Indiana Superintendent of Public Instruction Glenda Ritz that the state must prove its own standards are just as challenging, or else risk of losing its waiver from the Bush-era No Child Left Behind law and have its federal funding in jeopardy.

“Because the [Indiana Department of Education] will no longer implement those standards, IDOE must amend its [Elementary and Secondary Education Act] flexibility request and provide evidence that its new standards are certified by a state network of [Institutions of Higher Education] that students who meet the standards will not need remedial coursework at the postsecondary level,” the letter says. 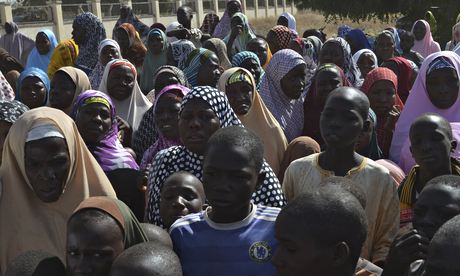 For two weeks, retired teacher Samson Dawah prayed for news of his niece Saratu, who was among more than 230 schoolgirls snatched by Boko Haram militants in the north-eastern Nigerian village of Chibok. Then on Monday the agonising silence was broken.

When Dawah called together his extended family members to give an update, he asked that the most elderly not attend, fearing they would not be able to cope with what he had to say. “We have heard from members of the forest community where they took the girls. They said there had been mass marriages and the girls are being shared out as wives among the Boko Haram militants,” Dawah…

Another WOW for NoisyRoom!

Republican Sen. Ted Cruz released a definitive list Wednesday of 76 “lawless” Obama administration actions and abuses of power.
Cruz’s “The Legal Limit Report No. 4,” obtained by The Daily Caller, delves into little-known and little-reported details of President Obama’s executive actions. Cruz was set to discuss his report at the Federalist Society in the Promenade Ballroom of the Mayflower Hotel in Washington at 2:15 PM Wednesday.

“Of all the troubling aspects of the Obama presidency, none is more dangerous than the President’s persistent pattern of lawlessness, his willingness to disregard the written law and instead enforce his own policies via executive fiat,” Cruz stated in the report’s introductory remarks.
“President Obama has openly defied [rule of law] by repeatedly suspending, delaying, and waiving portions of the laws that he is charged to enforce. When President…

By Marion Algier
askmarion
As the adage goes… ‘ Sunshine is the greatest disinfectant ’ and in the case of Benghazi… Persistence finally brings the disinfecting sunshine and the truth .

Thanks to Judicial Watch and several new informants coming forward to speak out… the truth about Benghazi is finally coming to the forefront and will come out, especially with the appointment of a special committee headed up by Congressman Trey Gowdy. Gowdy tweeted: I applaud @SpeakerBoehner for his decision to establish a Select Cmt on #Benghazi and am honored to serve as Chairman. Rep. Trey Gowdy said Friday that he has evidence of a “systematic, intentional” effort by the Obama administration to withhold documents from Congress (see video) about the 2012 Benghazi attacks that killed four Americans. Gowdy is a ruthless, winning and spiritual prosecutor and is the perfect man for this job! Something positive…

Giving it to you straight, is Mediaite:

The House of Representatives voted 231-187 tonight to hold former IRS official Lois Lerner in contempt of Congress, weeks after the House Oversight Committee voted to bring the contempt charge to the House floor. The point of contention is whether Lerner waived her Fifth Amendment rights during hearings into IRS political targeting.

In addition to the contempt charge, last month the House Ways and Means Committee voted to refer Lerner to the Justice Department for a possible investigation into criminal charges.

For the more comforting pro-Democrat spin, try the NYT. Their headline: “House Holds Ex-I.R.S. Official in Contempt (in what the NYTimes, and only the NYTimes calls) the “Tea Party Case“.

Written by Jeremy W. Peters, it’s crafted to be the least upsetting to their Tea-Party hating readers. It’s meant…

If someone should ask the question, “How can I pray for you?” would you be able to give a clear answer? Oftentimes we simply do not know what to say. The same thing can happen when we ask that question of friends—frequently we get only a vague answer. Learning to pray for one another does not come naturally; we must be taught.

That is why the Bible includes many patterns for effective prayer. One is found in Paul’s epistle to the saints at Colossae. He prayed that they would be “filled with the knowledge of [God’s] will” (Col. 1:9). The fact that the apostle prayed this means we can come to know what God is doing in our lives. When we understand His will, that knowledge is both satisfying and precious.

Paul’s prayer also included additional requests on behalf of the Colossians. He asked the Lord to bless…

Two Votes taken on Lerner: Click on Yeas or Nays in “Colored” boxes for individual votes

House votes to hold Lerner in contempt of Congress

The House voted 231-187 for a resolution holding Lerner in contempt. All the Republicans voted yes, along with six Democrats.

Lerner’s case will now be sent to the Justice Department, which then must decide whether to essentially…