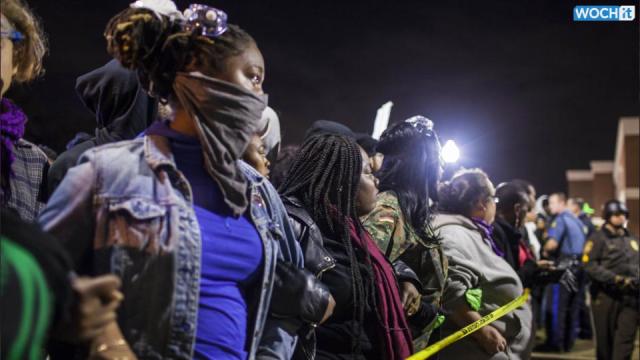 By Scott Malone 6 hours ago

ST. LOUIS (Reuters) – In a former union hall in downtown St. Louis, about 100 activists formed a rough circle and, at the instruction of organizer Michael McPhearson, crossed the room wading through a crowd of people going the opposite way.

“How hard was that? How much harder will it be after the grand jury comes back?” McPhearson, executive director of activist group Veterans for Peace, asked the group, which ranged from young black college students to bearded white retirees.

Police around the St. Louis suburb of Ferguson, Missouri, are preparing for large protests when a grand jury decides whether to indict the white police officer who fatally shot an unarmed black teen in August, and so are activists.

Several groups from across the United States, and even from abroad, are preparing to take…

I much prefer this source — a young black man who claims to be a government agent in Missouri, wearing a blue St. Louis baseball cap and a white t-shirt with the word “TAKEN” (pic below) — who says the same thing as Hodges’ anonymous “trusted source.”

The video below of Mr. Agent Provocateur was taken by Jimmy So Ambitious Wen-Birdboyz and uploaded to his Facebook page on August 18, 2014. This is what Jimmy wrote about the man in the video: http://www.dcclothesline.com/2014/08/22/obama-dhs-agents-ferguson-pays-protesters-justify-martial-law/

This is the heart of America. They chose this state for a reason. Get this agenda, man. This agenda is wrong, man. They plant people in our neighborhoods that look just like us, niggers … and say, ‘Go outside and protest.’ And they’re gonna have … assault rifles shooting at everybody on the block. That’s how they…

As ABC and NBC continued to censor any mention of the disparaging comments made by ObamaCare architect Jonathan Gruber from their Thursday night newscasts, CBS aired second story on Gruber with this one (and the other coming from Thursday’s CBS This Morning) airing on the CBS Evening News with Scott Pelley. While the report by CBS News national correspondent Wyatt Andrews covered what Gruber said, how Democrats and Republicans have responded, and that he was a paid White House adviser on ObamaCare, Andrews did not attempt to point out the contradiction House Minority Leader Nancy Pelosi created Thursday when she denied ever having heard of Gruber when she had in fact praised him in 2009. MORE: http://www.mrc.org/biasalerts/abc-and-nbc-continue-blackout-gruber-video-cbs-ignores-clip-pelosi-praising-gruber-2009

Is Abu Bakr al-Baghdadi, the self-styled “caliph” of the Islamic State, injured or dead, as some in the media are eagerly speculating?
Better question: does it really matter?
For almost a decade now, every time an Islamic jihadi leader is killed, the Western mainstream media exult, portraying the death as a major blow to the jihad. And, for almost a decade now, I have responded by posting an article that I first wrote in 2006 for Victor Davis Hanson’s website, Private Papers.
Although I changed the names of the jihadi leaders killed to suit the occasion—first Abu Mus‘ab al-Zarqawi, then Abu Laith al-Libi, then Abu Omar al-Baghdadi and Abu Ayub al-Misri, and finally Osama bin Laden—my conclusion has remained the same:

The West’s plight vis-à-vis radical Islam is therefore akin to Hercules’ epic encounter with the multi-headed Hydra-monster. Every time the mythical strongman lopped off…

Many of you may have seen the interview that Chris Kyle did for Fellowship Church last year, for the 4th of July. Below is the entire un-edited version, including when Chris had me come up on the platform with him. We miss you Chris but were blessed to have known you, RIP.