ALBANY — As government problems go, it’s not a bad one to have: How should New York spend a $5 billion surplus? The options are all bigticket items. The $3.9 billion Tappan Zee Bridge replacement. Schools. Upgrades to New York City subways. Statewide broadband access. Highways, water and sewer projects. The money comes from big settlements with banks and insurance companies like BNP Paribas SA and Bank of America Corp. For a state with a long list of needs and wants, the windfall provides an unexpected opportunity to invest in something big. But in Albany, even $5 billion only goes so far, and the battle over how to spend it is already brewing.

“A lot of people are lustfully eyeing that pile of cash,” said Michael Elmendorf, president of the Associated General Contractors of New York State, who wants the money to go to fix crumbling…

NEW YORK — The mother and widow of an unarmed black man whose police chokehold death sparked protests across the country said Saturday they’ve been moved by the thousands of peaceful demonstrators who have taken to the streets after a grand jury declined to indict the white officer involved.

“It is just so awesome to see how the crowds are out there,” said Eric Garner’s mother, Gwen Carr, who added that she ended up stuck in her car after protests shut down traffic.

“I was just so proud of that crowd,” Carr said. “It just warmed my heart.”

Garner’s widow, Esaw Garner, said she saw demonstrators from her apartment window and told her son, “Look at all the love that your father’s getting.” Demonstrators around the country have staged die-ins and other protests since the Garner grand jury’s decision Wednesday, which closely followed a Missouri grand…

In 1987, the first Palestinian intifada, or uprising, began as riots broke out in Gaza and spread to the West Bank…

In 1987, 43 people were killed after a disgruntled PSA employee [what was the name? Mo-ham-id maybe?] aboard a Pacific Southwest Airlines jetliner in California apparently opened fire on a fellow passenger, the pilots and himself, causing the plane to crash….

Dec. 7, 1941, the Empire of Japan launched a pre-emptive air raid on the U.S. Navy base at Pearl Harbor in Hawaii as well as targets in Malaya, Hong Kong, Guam, the Philippines and Wake Island; the United States declared war against Japan the next day.

“The entire Report was flawed! 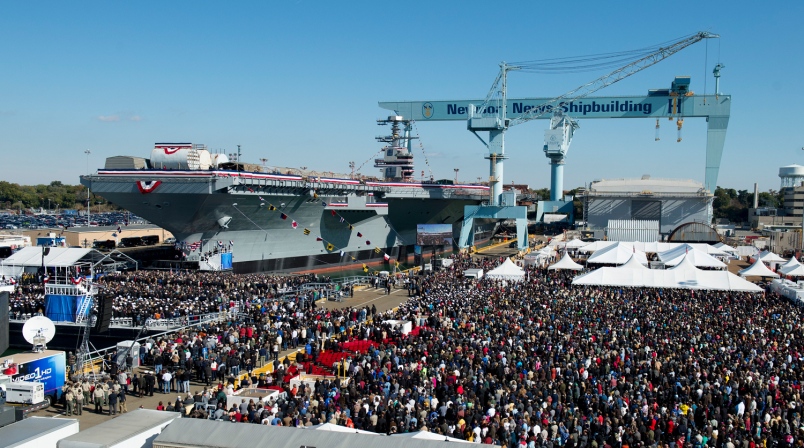 The USS Gerald R. Ford is christened during a ceremony Nov. 9, 2013, at Huntington-Ingalls Industries’ Newport News shipyard in Virginia. The Gerald Ford is the first of a new class of aircraft carrier intended to replace Nimitz-class carriers. – U.S. Navy

I’ll give you three guesses what the religion of the engineer is, but you’ll only need one. That’s right… the religion of pieces. Gee, I’m shocked! Who would have thought someone with a name like Mostafa Ahmed Awwad might be a security risk? Not the American Navy… no-siree.

So, a Naval engineer attempts to hand over schematics for our latest aircraft carrier and technical data to an FBI agent posing as an Egyptian intelligence officer and the penalty is only a maximum of 20 years on each count? Isn’t this treason? Or has that now been redefined as well? Dead drops, wearing a pinhole…