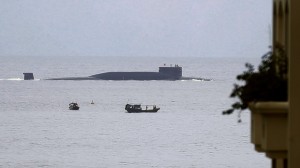 In this Aug. 28, 2014 photo, fishermen look at a Chinese nuclear submarine sails past…

The Chinese are moving to make a first nuclear strike against them from anywhere on the planet impossible. The nearly invisible JIN class submarines armed with nuclear JL–2 ballistic missiles will be primed to take enemies down before they can launch an attack against China.
From Bloomberg:

The nuclear-powered subs will probably conduct initial patrols with the missiles by the end of this year, “giving China its first credible sea-based nuclear deterrent,” according to an annual report to Congress submitted in November by the U.S.-China Economic and Security Review Commission.
Deploying the vessels will burnish China’s prestige as Xi seeks to end what he calls the “cold war” mentality that resulted in U.S. dominance of Asia-Pacific security. Since coming to power, Xi has increased military spending with a focus on longer-range…

Election results in November that emboldened the House Republican majority and delivered the U.S. Senate majority to the GOP be damned, House Speaker John Boehner is desperately turning to the Democrats to pass his omnibus bill that enables President Barack Obama’s executive amnesty.

The full bill, the text of which was publicly introduced at about 8:20 p.m. on Tuesday after congressional leaders missed several self-set deadlines throughout the day, is 1,603 pages long. That means it will be impossible for any member of the House or Senate to read the entire bill before voting on it this week.

The pure numbers in Congress suggest Boehner can’t get enough Republicans to pass his executive amnesty omnibus, something even his top lieutenants have admitted in recent days.

There are 435 members of the House, and to pass this bill, Boehner and his allies—including Louisiana’s Republican Whip Steve Scalise and California’s Majority Leader…

What ever happened to “American Sovereignty Restoration Act of 2013 “
https://www.govtrack.us/congress/bills/113/hr75/text
Introduced:Jan 3, 2013Status: Referred to Committee on Jan 3, 2013 Prognosis 1% chance of being enacted

IN THE HOUSE OF REPRESENTATIVES

Mr. Broun of Georgia introduced the following bill; which was referred to the Committee on Foreign Affairs

This Act may be cited as the American Sovereignty Restoration Act of 2013 .

Termination of membership in United Nations

The President shall terminate all membership by the United States in the United Nations, and in any organ, specialized agency, commission, or…

On Thursday, 15 August, US District Judge Vicki Miles-LaGrange struck down an Oklahoma state constitutional amendment (known as SQ755) that forbade Oklahoma’s courts from considering Islamic law (Shariah) in judicial decisions.
SQ755 had overwhelmingly passed a vote of the people in Oklahoma in November 2010.
This decision was not a surprise and echoed an earlier ruling by the Tenth US Circuit Court of Appeals back in 2010. As detailed in this article, SQ755 contained several flaws which rendered it counterproductive:
http://www.americanthinker.com/2011/09/american_laws_for_american_courts.html
Fortunately, there is an effective and constitutional alternative to measures such as SQ755 and Oklahoma joined a host of other states this spring in passing it into law. That law is called American Laws for American Courts (ALAC).
Authored by Representative Sally Kern and Senator Gary Stanislawski of Oklahoma, ALAC passed the Oklahoma…