Greece is on the verge of bankruptcy, and this flood of Muslims, mostly illegals from Turkey and Albania, bring nothing to the economy except crime and a growing class of parasites and entitlement whores.

Athens Police are so overwhelmed by the Muslim scourge that they turn a blind eye when right wing nationalist groups like Golden Dawn intervene against the invaders.

Digital Journal This time the riots were against a film produced in the U.S. that denigrates Islam’s paedophile prophet Mohammed. Greek riot police used tear gas and pepper spray to disperse Muslim protesters who clashed with officers Sunday during a rally. Usually the riots are about the government not giving them enough free stuff.
Around 1,000 Muslims hurled bottles and other objects at police that were trying to prevent the rioters descending on the U.S. Embassy. Protesting Muslims gathered in Omonia Square holding banners proclaiming “We demand an immediate punishment for those who tried to mock our Prophet Mohammed” Shouting “Allah is great” they assaulted police with bottles, stones and slabs of marble they broke from the sidewalks, as police tried to prevent the protesters approaching the U.S. Embassy.

A decades-old Sacramento, Calif. burger joint is shutting its doors for being out of compliance with the Americans with Disabilities Act because the owner says he can’t afford to bring it up to code.

Ford’s Real Hamburgers has been slinging burgers, fries and shakes for years, but was hit hard in the recession. Now, KTXL-TV is reporting that a local attorney who makes his living filing ADA cases — many on his own behalf — is suing the restaurant — and Ford‘s can’t keep up.

“We scrimped and saved and cut down the staff. I’m down to six employees,” owner Hank Vereschzagin told KTXL.

As the station noted, Ford’s is indeed out of ADA compliance: There isn’t enough room to roll into the bathroom in a wheelchair. But Vereschzagin said he just doesn’t have the money to fix the more than 60-year-old building.

Scott Johnson, the attorney filing the suit, didn‘t comment to KTXL about the Ford’s complaint, but he did speak to the station earlier this year when he was suing a diner.

“Being a quadriplegic, there’s nothing I can do about that,” Johnson said in February. “But these businesses that have structural barriers to access, that’s frustrating.” 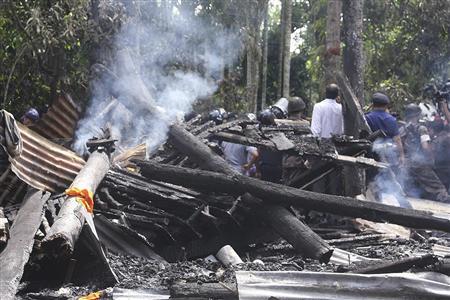 Hundreds of Muslims in Bangladesh burned at least four Buddhist temples and 15 homes of Buddhists on Sunday after complaining that a Buddhist man had insulted Islam, police and residents said.

Members of the Buddhist minority in the Cox’s Bazar area in the southeast of the country said unidentified people were bent on upsetting peaceful relations between Muslims and Buddhists.

Muslims took to the streets in the area late on Saturday to protest against what they said was a photograph posted on Facebook that insulted Islam.

The protesters said the picture had been posted by a Buddhist and they marched to Buddhist villages and set fire to temples and houses.

Many people in predominantly Muslim Bangladesh have been angered in recent days by a film made in California that mocks the Prophet Mohammad.

Muslims in Bangladesh and beyond have also been outraged by violence over the border in Myanmar where members of the majority Buddhist community clashed with minority Muslims this year.

Police had escorted the man accused of posting the insulting photograph and his mother to safety, Jahangir said.

The Michigan lottery winner who shot to prominence after admitting that she was still collecting food stamps died Saturday of a possible drug overdose, the Detroit News reported.

Amanda Clayton, 25, was found dead at home around 9 a.m. Saturday, Ecorse police Sgt. Cornelius Herring confirmed. An autopsy is pending, according to WXYZ-TV.

Her friend’s boyfriend told WXYZ Clayton was discovered lying on the bed with her 1 1/2-year-old. The boyfriend said Clayton was “already in a bad stage” Friday night.

In March, a local news station confronted Clayton on camera about why she was still using food stamps to pay for her meals after winning a $1 million lottery prize. She defended the practice, saying, “I feel that it’s OK because I mean, I have no income and I have bills to pay, I have two houses.”

The state of Michigan said Clayton received about $5,500 in food aid and medical benefits after winning a pre-tax lottery windfall of $735,000 last year, according to the Detroit News.

State officials took Clayton’s welfare benefits away once her story went viral. She pleaded no contest to fraud in June and was sentenced to nine months’ probation in July.

It doesn’t take long for those with an interest in Bible prophecy to begin drawing comparisons to the study of what the Bible calls the “end times” to today’s news headlines.

To them the book of Matthew, Chapter 24, reads like the front page of the New York Times.

Jesus’ disciples asked him in Matthew 24 for a sign of the “end of the world.” He answered their question with a series of events to watch for, and so began the job of those who would watch for these things to take place.

One such person is Jan Markell, who runs Minnesota’s Olive Tree Ministries. Markell, a Messianic Jewish believer, is an accomplished author and speaker, and hosts a radio program syndicated on 551 Christian radio stations, called “Understanding the Times Radio.”

Several years ago, she also began hosting an annual conference called “Understanding the Times,” which she holds in a large, suburban Minneapolis church, to larger and larger crowds every year.

“When I look at the headlines, I see America imploding, the Middle East on fire and I see the church in a state of apostasy,” the founder of Olive Tree Ministries told WND.

Those subjects will be the focus of the upcoming “Understanding the Times 2012 Conference,” to be held in the suburbs of Minneapolis on Oct. 5 and 6.

The ministry brings in speakers to give context to end-times eschatology, or the study of the end times, from a Biblical perspective, and this year the conference promises to bring in large crowds of people eager to understand what is happening in the world, and specifically in America.

If anything as embarrassing as what follows occurred at a Republican presidential contender’s website, including the follow-up ridicule by the opposition, the press would never be able to resist covering it.

A mythical (I hope) ecard created at the Obama-Biden campaign site call purports to be from a daughter to her mother, and asks about the most ridiculous question you can imagine.

On Friday, TheBlaze reported that the MTA changed its guidelines on what advertising it will accept from now on after losing in court to Geller and her group, the American Freedom Defense Initiative, thus being forced to display the ads which read: “In any war between the civilized man and the savage, support the civilized man. Support Israel. Defeat Jihad.”

Specifically, the MTA has set a new litmus test for ads and will no longer display those which the MTA “reasonably foresees would incite or provoke violence or other immediate breach of the peace, and so harm, disrupt, or interfere with safe, efficient, and orderly transit operations.”

Prof. Alan Dershowitz, a staunch defender of Israel and a political liberal, is calling the new rules bad policy that will have the unintended consequence of encouraging violence. He spoke to the New York Jewish newspaper The Algemeiner:

If you want to see how Soviet-style disinformation has spread in our own country, look no further than the Communist Party USA. Sure, no one could spin a web of lies quite like the Soviets and the Kremlin, but their American devotees are likewise excellent at agitation, propaganda and deliberate deception. America’s communists have produced some impressive homegrown disinformation. Here, I’ll consider an especially productive example, which still bears bitter fruit today among the wider American left: the campaign against the House Committee on Un-American Activities.

In this skillful, cynical disinformation campaign, American communists, working with duped progressive/liberal accomplices, framed their accusers as “fascists,” “Nazis,” “McCarthyites” and even “racists” who were (allegedly) unfairly hounding and maligning them by investigating their ties to Moscow. In truth, the accused were frequently guilty – and, at the least, merited attention. Nonetheless, these leftist forces came together, under the leadership of the CPUSA, the Daily Worker and other far-left forces, in coordinated campaigns such as “Operation Abolition,” which sought to abolish the House Committee on Un-American Activities, which they tagged as “HUAC” – the “House Un-American Committee,” a label that sticks to this day.

Of special interest, one of those who engaged in this campaign was Frank Marshall Davis, a closet CPUSA member who in the 1970s would go on to mentor a young Hawaiian boy named Barack Obama, our current president.

Spanish-language television network Univision plans to air a television special that it said reveals more violence than previously known, as well as the stories of how many more Operation Fast and Furious victims were killed, the network announced in a Friday release.

“The consequences of the controversial ‘Fast and Furious’ undercover operation put in place by the U.S. Bureau of Alcohol, Tobacco, Firearms and Explosives (ATF) in 2009 have been deadlier than what has been made public to date,” the network said. “The exclusive, in-depth investigation by Univision News’ award-winning Investigative Unit — Univision Investiga — has found that the guns that crossed the border as part of Operation Fast and Furious caused dozens of deaths inside Mexico.”

Among other groups of Fast and Furious victim stories Univision says it will tell in the special to air Sunday evening at 7 p.m., is one about how “16 young people attending a party in a residential area of Ciudad Juárez in January of 2010″ were gunned down with weapons the Obama administration gave to drug cartel criminals through Fast and Furious.

“Univision News’ Investigative Unit was also able to identify additional guns that escaped the control of ATF agents and were used in different types of crimes throughout Mexico,” the network added. “Furthermore, some of these guns — none of which were reported by congressional investigators — were put in the hands of drug traffickers in Honduras, Puerto Rico, and Colombia. A person familiar with the recent congressional hearings called Univision’s findings ‘the holy grail’ that Congress had been searching for.”

A video preview published on Friday shows a number of the bodies of people killed with Fast and Furious weapons, as well as victims’ family members pleading with outgoing Mexican President Felipe Calderon for justice.

The story comes from Pakistan Christian Post via The Religion of Peace.

Gujranwala: September 16, 2012. (PCP) A Pakistani Christian girl student of grade 6th named Aney daughter of Tariq, resident of Dhula Gujranwala, was kidnapped on September 4, 2012, on her way to school.

The Muslim kidnaper Haider Butt son of Mohammad Ijaz announced same day of September 4th that Aney has converted to Islam and married him with her free will.

The official age of marriage in Pakistan is 18 years when any one becomes officially adult while Islamic law in Pakistan sets that age of 16 but some Muslim sects perform marriages when girl is confirmed to have monthly periods.

According to informed sources in Aney kidnapping, forced conversion and Islamic marriage claim by Muslim kidnapper not fit because Aney was not having her monthly periods even.