If you do not know history, and you do not know how to reason, then you cannot recognize the patterns in history when you see them starting to repeat.  Instead of being able to see that a principle can manifest in many different ways, you will be prone to looking at the different ways it manifests itself and determine that they have nothing in common with the past.  Thus, you will totally miss the principle in lay.  This is why, when those who know history look back on it, they see the same patterns repeating over and over again.  This is why we are missing the warning signs today.

Here are just two headlines that illustrate my point.  I could have chosen any number of many such headlines, but these two will work for the issue at hand:

“He’s absolutely right that there are differences in temperament [between liberals and conservatives], and science has been able to shed some light on that,” Professor John Hibbing of the University of Nebraska, an expert on the relationship between biology and political orientation, said in an interview with POLITICO.

New York Gov. Andrew Cuomo: Some Conservatives ‘Have No Place in the State of New York’

New York Gov. Andrew Cuomo said in a radio interview that if “extreme conservatives” are “right-to-life, pro-assault-weapon, anti-gay,” then “they have no place in the state of New York, because that’s not who New Yorkers are.” …

The problem here is that everything Al Gore is asserting as true is nothing more than subjective value judgments.  ‘Science’ has not proven global warming is real any more than it proved Aryans superior to other races, this is just the boogey-man they need to create the fear necessary to drive the rest of their agenda.  And ‘homophobia,’ ‘racism,’ ‘smoking,’ etc are all value judgments that may and may not have an objective foundation, just as many of the assertions Hitler made had little objective foundation behind it.   It’s the same pattern, just different particulars.  Whereas Hitler claimed that ‘science’ had ‘proven’ Jews were the cause of Germany’s problems to justify his ‘final solution,’ Al Gore and Cuomo (and those like them) are blaming “conservatives” for all the world’s ills and pointing to ‘science’ to support their claims.  Once enough people buy this sort of propaganda, the natural conclusion is inevitable: eliminate the threat to society for the sake of society.  And that’s how you get to the point where people think this sounds reasonable:

NOTE: You must watch this entire video — and watch it carefully, all the way to the end; because it is at the end where the connection between Hitler and American Progressives is made clear. 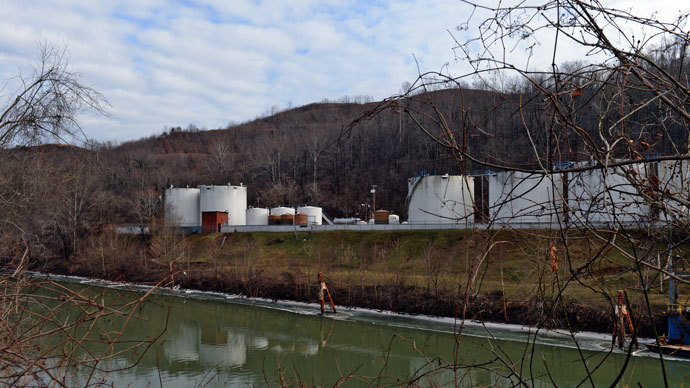 Freedom Industries on Barlow St on the banks of the Elk River is seen on January 10, 2014 in Charleston, West Virginia.(AFP Photo / Tom Hindman)

Freedom Industries, the company responsible for the methanol leak that contaminated the water supply in a West Virginia town, has filed for Chapter 11 bankruptcy, according to a new report.

The company’s Board of Directors convened at a special meeting on Friday to file a voluntary petition for bankruptcy protection, according to WVNS-TV in West Virginia. Notes taken at the meeting obtained by the Wall Street Journal indicate that Freedom Industries estimates the company debt is currently at approximately $10 million, although the inevitable clean-up costs, lawsuits, and other fees incurred because of the spill will add to that burden.

Approximately 300,000 people throughout nine counties near Charleston, West Virginia have been…

ObamaCare, the IRS and a host of other scandals have dragged Obama’s approval rating down below 40 percent but what does he blame for his troubles?

The popular opposition to the Administration comes largely from older whites who feel threatened, underemployed, overlooked, and disdained in a globalized economy and in an increasingly diverse country. Obama’s drop in the polls in 2013 was especially grave among white voters. “There’s no doubt that there’s some folks who just really dislike me because they don’t like the idea of a black President,” Obama said.

Remember when liberals told us Obama was a uniter?

If Kelly Thomas had lived in Communist North Korea, rather than conservative Orange County, California, he might have survived his encounter with the police.

Two days ago, a jury in Orange County, acquitted the two police officers who led the fatal gang-beating of Thomas, an unarmed, mentally troubled homeless man. The jurors acted on the assumption that the lethal violence was justified because the victim tried to defend himself after the police began their assault.

American police taught to treat any act of non-compliance as “resisting arrest,” a supposed offense that justifies the use of pain compliance and — in cases like that of Kelly Thomas — lethal force, if it is necessary to subdue the victim. In fact, most police who go “hands-on” with a victim will pre-emptively shout “Stop resisting!” even when no resistance is offered. Any incidental contact with the sanctified person of a police officer is…

“Consider the plight of Israel in Egypt. God’s nation was in incredible ruin, with widespread apostasy. Satan had Israel under his heel, manipulating the political powers of the day to make laws against them and persecute them. The enemy was ridiculing and mocking God’s testimony on earth.

It was a dark hour in Israel’s history and over time the people grew discouraged. […]