Israel’s Netanyahu to warn US, UN about Iran’s ‘smiley campaign’ with Video.

Just days after the first conversation between the leaders of the U.S. and Iran in 34 years was hailed as a “breakthrough” in relations between the two countries, Israeli Prime Minister Benjamin Netanyahu is taking an unpopular message to the White House and the United Nations: Don’t be fooled by Tehran’s “sweet talk.”

Netanyahu, who contends Iran is using conciliatory gestures as a smoke screen to conceal an unabated march toward a nuclear bomb, will meet with President Obama Monday to deliver strong words of caution to the U.S.

As fighting continues in Syria, 43 Islamist groups have united to form a joint “Army of Islam.” The groups have agreed to act under the joint leadership of Sheikh Muhammad Zahran Alloush. The Army of Islam’s creation was officially announced in a ceremony on Sunday, September 29, 2013.

Al-Qaeda’s Jabhat al-Nusra, along with ideologically similar groups such as ‘Ahrar al-Sham’ (Free [Men] of the Levant), did not join the “Army of Islam”, despite sharing its goal of toppling President Bashar Assad and instituting Sharia (Islamic law) in Syria.

At the same time, the “Free Syrian Army” (FSA) is working to reunite its leadership after several commanders disassociated themselves last week from its leadership.

Thirteen militant brigades announced that they reject the Syrian National Coalition (SNC) and the FSA under the leadership of Salim Idriss. The groups’ commanders called to unite under an Islamist…

He just keeps on loading up the sh-t, doesn’t he? To paraphrase King Henry II: WHEN WILL CONGRESS RID US OF THIS MEDDLESOME MESS OF A PRESIDENT?

Washington, DC – President Barack Obama held a press conference to announce that he is declaring the month of November “National Muslim Appreciation Month.”

“The Muslim community deserves our full acceptance and respect,” Obama told reporters. “We have killed millions of Muslims overseas since the September 11th attacks. They are not all bad. In fact most of them are good. So from now on, November will be a month to celebrate the Muslim community, the Sunnah and the Quran.”

Khaled Matei who is a member of the Muslim Brotherhood‘s Freedom and Justice Party told CNN he is pleased with Obama and his actions. “I spoke with President Obama by telephone yesterday and personally thanked him for what he is doing for the Muslim community,” Matei said. “This is definitely a step in the right direction I explained to him. Praise Allah.”

Obama informed reporters about his future plans for helping Muslims around the world. “I will be working with Congress in making it easier for Muslims to earn a Green Card and achieve American citizenship,” Obama said. “Currently as it stands, obtaining a Visa or Green Card for a Muslim is very difficult. There are too many background checks in place and I plan to fix that.” Obama continued, “Muslims are hardworking people who are just looking to live the American Dream like the rest of us. Mr. Matei of the Muslim Brotherhood assured me they want to come to this country to help us, not harm us.”

Obama finished the press conference by explaining to reporters how happy he is with America. “Folks, there is no way we could have had a ‘National Muslim Appreciation Month’ 20 years ago. That really says a lot about the growth and progress of this great country.”

About that National Muslim Month . . .

To all my readers:

It took about ten minutes for my email to start blowing up after I put out the article “Hussein Declares November “National Muslim Appreciation Month.”

By an hour later, I was laughing or sighing at the variety of responses that were coming in AND I was totally not able to reply because I was doing a booth for ACT! for America & selling my book at the “Defend the Constitution” event at the Will Rogers Memorial Center in Ft. Worth. We attendees heard from many 2014 conservative candidates roaring to get into state and federal offices to stop the Socialist/Liberal/Islamic Express that is so ruining our great country. That it wasn’t too late! We could still get God back into our hearts and use the Constitution the way it’s supposed to be used, not the way it’s being trashed now. It was a good afternoon.

I didn’t stop thinking about the fake report that Paul Horner of the NationalReport.net had just put out, so’s to play with the conservatives. Oh, how funny, he was probably thinking, got the country bumpkins again! They’re so stupid! Ha ha ha. The problem for him, of course, is that the only reason we would fall for it is that it could very well be true. We know that president he’s talking about, we know he’s fully capable of selling out the country to the Muslim Brotherhood; we know he’s been doing it all along, bit by bit. It’s not much of a stretch to believe he’d lift the green card restrictions; he’s already letting in by EO thousands of Islamic “refugees” that ultimately bodes not well for the Republic. We know he has no use for God and the Jews or Christianity.

If not, of course, Horner’s head fake wouldn’t work. So he had to be telling us enough truth to lie to us.

As it happened, when I got home a blast-lister had forwarded this to me. The Examiner said it better than I did: http://www.examiner.com/article/the-problem-with-hoaxes-like-muslim-appreciation-month

While I listened to the speakers, I also thought a lot about how to respond to the various “voices” on my email. Most just wanted to make sure I knew the thing was fake. Thank you all! There were also many who thought the thing was true and responded with the horror I would expect for those who love their country, complete with lists of past BHO anti-Christian statements/pro-Islamic statements. Thank you all! There were some who said they thought the satire was great. That works, too; laughter is a good stress-reliever. And there were those who . . . . well, let’s just say they apparently prefer to stay home and complain about others than get out to events like “Defend the Constitution,” because I’m pretty sure I didn’t see them there.

To the emailer who said: “You’ve been punked”: No. The country’s been punked by a giant sorry sack of manure. And I don’t mean Horner, though he’s a good runner-up for the day.

To the emailer who said: “Good god, get it right, can’t you?” I say: I’d be willing to make a small wager that I’m trying harder than you are.

To all of you: Thank you for reading my emails! The fact that you all do keep on reading day in and day (okay, so sometimes there are too many, but I move with the speed of live, as Fox says) out is great. I do hope to see you all signing up for ACT! TX Beware False Prophets on 11/16!

Separating the Kafirs from the Muslims.

When the al Shabaab jihadi group from Somalia attacked the mall in Kenya, they gathered the crowd together and asked who were Muslims and let them go. According to the media, they then started killing the non-Muslims who were left. But non-Muslims is not the word what the terrorists would have used. No, they would have called them Kafirs (actually they would have called them the Arabic plural of kafir, kuffar. Kafirs is the standard English plural form). Why did members of al Shabaab do this? Why did they ask the Muslims to leave and keep the Kafirs and start killing them? Let’s start with the word terrorists. Members of al Shabaab are not terrorists, they are jihadists or mujahedeen. That is what they call themselves.
So what difference does it make which words we use? Non-Muslim or Kafir? Terrorists, militants, jihadists or mujahedeen? It makes all the difference in the world. You cannot think precisely with imprecise words and a Kafir is much more than non-Muslim.
The word “non-Muslim” does not imply anything, except not being a believer in Islam. 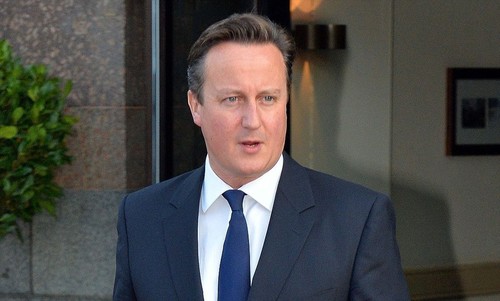 The Prime Minister said cutting ties with the Strasbourg courts could be the only way a future Conservative government can keep the people of Britain safe.

The Prime Minister said cutting ties with the Strasbourg courts could be the only way a future Conservative government can keep the people of Britain safe.